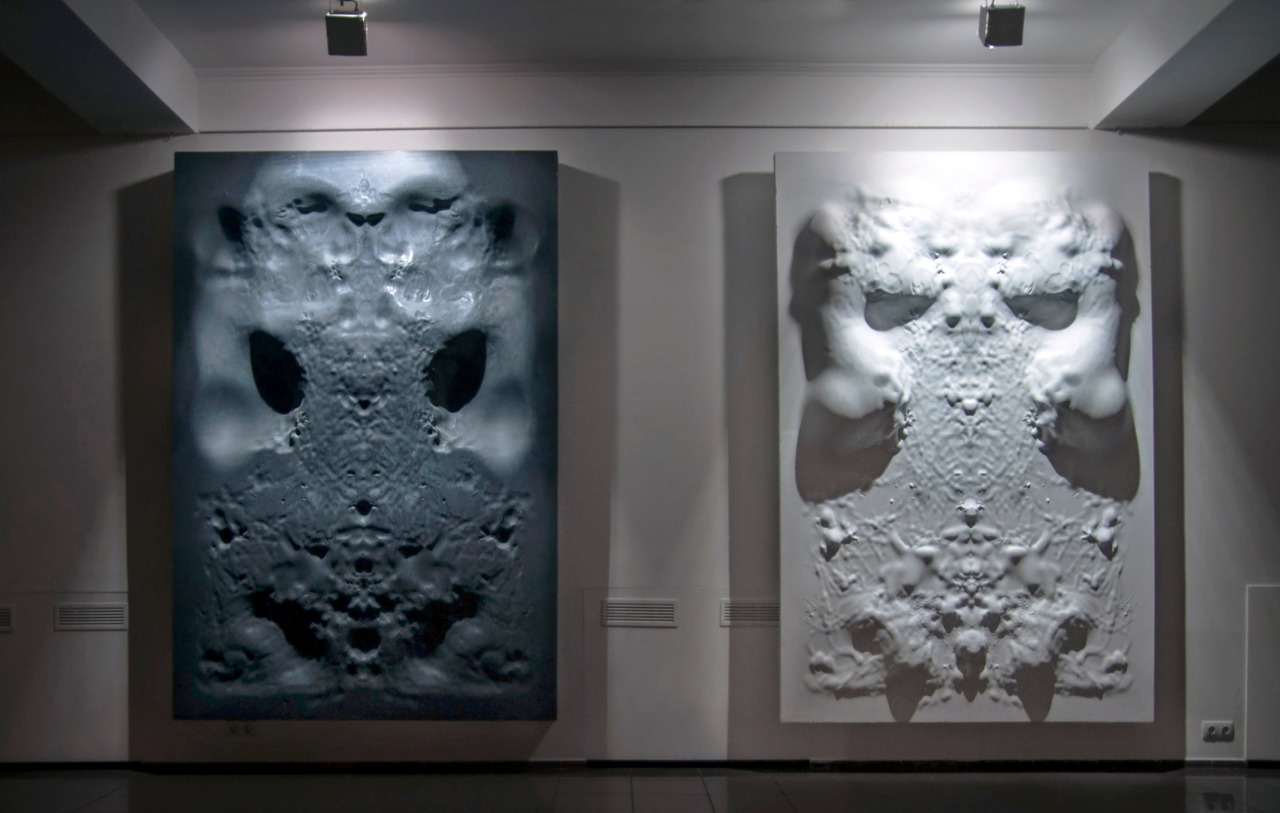 Of all exhibition spaces in Kyiv, an enfilade of small rooms on the first floor of the former manor of Fedir Tereshchenko which now houses the National Museum “Kyiv Gallery of Paintings” is especially suitable for insightful and well thought-out exposition projects. The predefined route allows the public to follow the artist’s idea as it develops, track its key arguments and create a choreography of perception. In Imaginary Distances, shown in the late 2018 — the early 2019, Nazar Bilyk had accomplished a loftier goal: he not only owned the space but changed it to the point of unrecognizability. Memory retains the impression of unreality, the metaphysical atmosphere and ineffability of the place itself, with clear visuals of silhouetted heads, large swee­ping landscapes and graphic fragments standing out against the darkness; the artist’s self-portrait, carefully masked by heavily blurred outlines, lorded over the whole exposition. Created with this museum space in mind, the exposition became its essential part for the show’s duration, revealing the subtlest, otherwise invisible connections and meanings.

Adam’s Tree, organized in 1995 in the same space by Oleksandr Sukholit, Andriy Polonyk and Oleksandr Ridnyi, comes to mind. Developing the idea of hierarchical space conceived three years earlier at Sukholit’s studio, the artists created a total installation where each element, be it a sculpture, a prop or lighting, interacted with every other object and contributed to the sum total. Comparing the two projects, we should emphasize the radical difference between the artists’ sources of inspiration: Sukholit and his cohorts were closer to archaic art whereas Bilyk embraces the 20th century modernist tradition in European plastic art, including the works of Alexander Archipenko. The impact of Archipenko’s revolutionary experiments with volume is particularly prominent in the series where the “surrounding space” makes up for the absence of forms as such. Nazar Bilyk’s first experiments with negative space go back to 2012, when he pushed back against the influence of his schooling and his family, also active in the field of sculpture. What followed were The Containers, Prints and even attempts to “wipe out the conflict” between the internal and the external, but he did not attain the true harmony between the two until Imaginary Distances.

The counter-relief of A Portrait with a Different Plane, which was included in the project, resembles the Shroud of Turin, where the negative proof contains the positive image. The positive image in Nazar Bilyk’s project is contained in a water mirror placed at the sculpture’s pedestal. The symmetry of indentations and protrusions of another self-portrait is hard to discern: it’s more of a projection of the artist’s inner state, “the manifestation and monumentalization of the subconscious” in his physical parameters. Bilyk stresses that “this figure provides impetus for free associations, and the viewer can see any arbitrary image in it; in a way, it is a test based on assumptions and guesswork.” The artist found inspiration for the project in Cappadocia (mo­dern Turkey), with its unique volcanic landscape. Having found himself in this gigantic natural landscape, he saw parallels between his own experiments and the universal natural laws of form-creation. The discovery was so intense that he retreated from human presence, so only the walls of the cave abandoned by its ancient residents and the starry sky above had witnessed his thoughts. Imaginary Distances, Nazar Bilyk’s most persuasive and personal artistic statement at present, were the product of this unique experience.